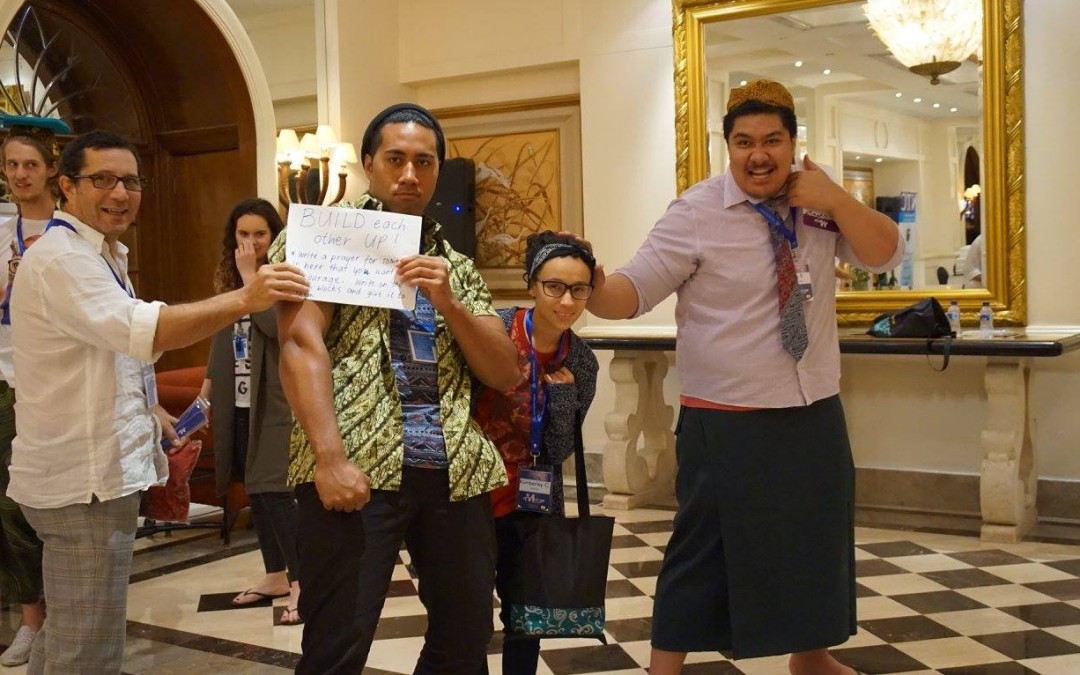 I spent most of my time in Indonesia inside a hotel, attending meetings and having conversations with youth and youth ministry leaders from dozens of countries in South Asia, Australia, and the Pacific Islands. It’s hard to describe what it’s like being in a global setting. My husband said it beautifully on his blog today:

“God’s imagination for God’s people creates endless expressions of hope in our world.”

I have so much hope when I’m with the global youth ministry family. My imagination swells as I see parts of God’s image that I would never see otherwise. It’s straight up one of the most coolest things ever. One part of God that I saw happened in an encounter I had with some friends and two trees.

During my last night in Jogykarta,  we ventured outside of the hotel with friends who had mini vans. Classic youth ministry story right? Accept our little caravan was made up of people from the U.S.A., Indonesia, Figi, Australia, and the Philippines. We had just met each other days before and we already trusted each other at 1AM in the middle of a city we’d never been to before.

We had two guides with us, locals who we trusted who led us to doing one of the scariest things I’ve ever done in a foreign country: voluntarily putting on a blindfold and walking somewhere alone.

We were taken to the King’s palace, the actual palace of the King of Indonesia. It’s one you can walk around and get close to. I was baffled by this. That the King’s house was so approachable, that he lived there, and that he didn’t mind if everyone in the city hung out there at night. I imagine our KING is like that.

Behind the palace were two giant trees (alun alun). Each tree had a white fence around the bottom. They were about 100 yards apart from each other in an open field. We parked the van, piled out, and it was there that we were told the legend.

“If you can walk between the two trees while blindfolded, then you are chosen.”

People start a few hundred yards back, are blindfolded, then take the journey to see what their fate will be.

There was no way I was going to do it. The first guy Fa took a turn. We silently guarded him while he unknowingly walked past both trees to the right for a pretty good distance. Then another friend, Abi had a turn. She did great until she said, “I feel like I’m of balance” which led to her taking a pretty good sharp right, also missing the trees.

Then Absalom had a turn. He seemed uneasy, like me, not sure if he wanted to try. Until he put on the blindfold and just started walking confidently straight through the middle. When he passed through everyone lost their minds.

Everyone took turns protecting each other as each person tried to walk blindly through the trees.

There were others with other groups walking blindly at the same time. Sometimes, we’d have to use hand signals to keep walkers from running into each other. For the most part, your friends are silent while the blindfolded friend takes a turn.

After a few rounds they said it was my turn. I felt something inside of me release, and wherever that lived trust grew. I believed they were going to walk with me, whether I could see them or not.  And, they did.

It was the quietest walk of my life. I couldn’t hear a soul. I walked awkwardly forward yet confidently knowing my new friends would never let me fall into trouble. So I pushed forward and each step grew less scary to take. Finally it got very quiet. It was then I knew I had walked to another city and missed the tress altogether. I had never felt so strange and distant! But I hadn’t done what I thought. Someone untied my blindfold to reveal that I had walked directly through the center of the trees. Before I knew it I was being picked up and and hugged and spun around by the Church. My friends. My Church.

The trees told them I was chosen that night.

But the game told me we all are.

And the key is to stay together, especially when one of us is walking in the dark. Even if we silently wait until they arrive, we stay next to them like guardrails or an army that knows only love.