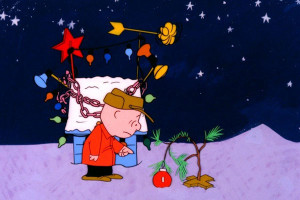 A CHARLIE BROWN CHRISTMAS – When Charlie Brown complains about the overwhelming materialism he sees amongst everyone during the Christmas season, Lucy suggests he become director of the school Christmas pageant. Charlie Brown accepts, but it proves to be a frustrating struggle; and when an attempt to restore the proper spirit with a forlorn little fir Christmas tree fails, he needs Linus’ help to learn what the real meaning of Christmas is. “A Charlie Brown Christmas” airs on MONDAY, DECEMBER 8 and TUESDAY, DECEMBER 16 (8:00-9:00 p.m., ET), on the ABC Television Network. (© 1965 United Feature Syndicate Inc.)