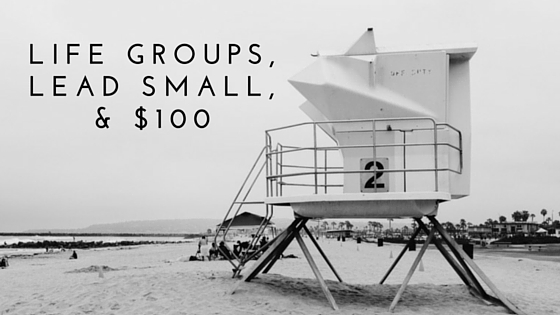 “If you want to get serious about influencing the hearts of this generation, you have to think about creating an actual, visible, consistent place where they know they belong.”
― Reggie Joiner, Creating a Lead Small Culture: Make Your Church a Place Where Kids Belong

Arrange her stick pile so it doesn’t seem like our family is solely responsible for the deforestation of Lakeland.

Find where “the smell” is coming from and either cover it up or clean it up.

Doesn’t everyone’s clean up efforts the day before before small group look like this? If this isn’t your may I recommend getting a puppy and some children (yours or someone else’s). I know a lot of people who would love to lend theirs out for a few minutes. Every soul needs a good dose of “what in the name of all grossness is that smell?”

(Quick note: Our church call’s small groups “life groups” but it’s pretty much the same thing. It’s a group, it’s small, everyone who arrives is living. I use the terms interchangeably, thanks for understanding.)

We had just finished up the cleaning and girls started arriving at our house.

My youngest Mya (she’s 5) just got done having a 20 minute monologue meltdown on the topic of “WHY SCHOOL”.

“Why is there so many schools mommy?

Why do they have a kids school, and a middle school, and another one after that that I can’t remember the name, and a college school?

Why can’t the world be nice and we just have pre-school until we grow up and then get married? I don’t even get to have cupcakes on my birthday. There aren’t even any parents who celebrate the birthdays in the classrooms. They only give you a card and sing a song and it’s the saddest thing. We don’t even get to do fun things or be funny. It’s just work and boring and no pretending. Why can’t we pretend that school is invisible and just give us time to dress up at Halloween and keep a journal?”

She wanted to be connected like she was in pre-school. She wanted more. But I don’t have any answers. I only have the promise of cupcakes on her birthday and more questions of my own like “how did pretending die? And why isn’t someone doing something about it?”

Enter everyone else who isn’t five years old. Doorbell rings. About 10 times.

My small group is made up of girls who I have known since they were five years old. I remember some of their middle school drama, that time when they were connecting so many pieces, and now they are carrying car keys and coming in to my home by themselves and not in groups of two or three.

I had prepared my Lead Small App (if you don’t know what it is and you have a small group, just look it up in the App store and get it! It’s free and the most beautiful gift to small group ministry. Trust me!).

I had prayed for their hearts and their conversations. I had asked God to make this place safe for them to bring their heavy things, their awkward things, their doubts, and their questions.

When we opened up the group with an icebreaker, “what would you do if you were handed $100 right now” I wasn’t prepared for what I would hear.

I guess I felt like the girls’ five year old selves would show more. But they didn’t.

The first girl said, “I’d give the money to my parents. It’s not always easy financially.”

The second said, “I’d give the money to my mom for gas, we are always on E.” (said with a laugh & sense of contentment that’s rare to see)

The third said, “I’d give the money to my parents for groceries, but if they wouldn’t accept it then I’d by something but I don’t know what.”

The fourth girl had my heart. She was thinking what I was thinking. She’d by a pair of new shoes. But she said, “I feel bad for wanting shoes, because I really love my parents and give it to them if they needed it.”

We kept going around and it became clear that every girl in the circle valued relationships and support over stuff they could buy if they had the money for it.

I started thinking about the similarities and differences between my five year old and the 15 & 16 year olds sitting on my porch and I believe they are all wanting the similar things.

Our kids who were made by a creative, courageous, compassionate, connective God long for the same stuff to fill their lives. It’s because it’s what they are made of, whether they are five or fifteen, they express desires to belong to others and for others to belong to them.

My youngest wants Kindergarten to be less rigid and more relational.

My small group wants the people they love the most to be blessed by them.

In every phase, there is a desire for connection; sometimes it only takes a little bit of conversation, listening, and some curiosity to see the type of connection they are looking for.

What are the ages of the kids in your small group?

What do their answers tell you about their need for belonging and how it’s expressed in the phase that they are in?

Mya, my five year old, would buy cupcakes for everyone’s birthday and she would pay the teacher to have more pretending time.

My small group would wow their parents with extra cash.

What would your kids do?