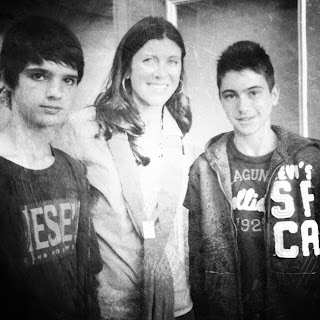 Do you ever feel like every day is the greatest adventure of your life?

I would consider myself a type “A” sort of person, but lately I’ve found myself much more flexible. Plans become tentative when there’s an opportunity to read in a hula hoop sheet castle under a tree with your kids, or demolish a section of your patio that has been bugging you with a friend who came over to eat with her family. We started with dinner and ended with demolition. Life is fun like that.

Today, after listening my husband preach at our church (always a highlight), and giving some subtle fears that have crept into my life to God at the altar of surrender, I ducked out to head to the hospitatlity room to meet guests.

There I met Louis et Louis. Yes, two Louis. Both fourteen years old. Both from the south of France. Do all 8th graders in the world with access to a shopping mall wear Hollister-Laguna-Beach-Hoodie-Skinny-Jean-Skate-Shoe uniform? I’m not sure, but these guys did.

After practicing my four years of French class on them–which took a whole 30 seconds–I asked them in English if they lived close to the ocean. They do. I asked them if they could surf. They don’t. I asked them if other people surf where they live. They said yes, lots. I asked them if we could come over sometime. They said sure. Now we have friends in the south of France, who hopefully, by the time we get a flight over there will be able to drive us around and show us a few things.

What captured me about Louis et Louis, is that they were so much like our teenagers here. A little shy, but not totally. I could tell underneath they were fun-loving guys who would probably be willing to throw down in a game of dodgeball if we were in the proper setting. And I bet, if I drove them to the beach and let them borrow our boards they’d dive into our East Coast average temp-73 degrees-tropical water, without hesitating. (I offered them whatever I had, but they were heading home this afternoon!) We exchanged a few final words. I told them I’d be over some day to share some pain au chocolate and they told me that in their region they call it “chocolatine”. Right there, they educated me. If you say “chocolatine” in Paris they won’t know what you’re talking about. It’s special, it’s what we say in the South of France.

As we said au revoir, I had a thought.

It was the kind of thought that stops the world from rotating for a split second (only in my mind, I know if that were to actually happen we’d all be in a lot of trouble, but it really feels like super distractions chill when I get a thought like this so thanks for humoring me, like Louis et Louis did when I tried to introduce myself like a pre-schooler…je’mappell Brooklyn. Comment allez-vous?).

Is our youth ministry an extension of a global movement of students connected internationally, living missionally, changing the world globally? Is that a lot to ask of a 6th, 7th, 8th grader? High schooler?
I don’t think so–but I think it needs more thought.

I try my best to share with and borrow from local youth ministry friends and even some around the US, but how often am I conversing with youth minsitry leaders in the UK? In Russia? In Africa?

Why isn’t this happening more, even in the most remote villages of Africa, where there is crystal clear cell phone reception?

My husband asked Louis his opinion of church this morning. He told us that they don’t have churches like this where he is from. He told us he liked our church very much but there’s nothing like it where he lives.

I don’t believe in youth ministry in a bucket. Putting all of youth ministry best practices in the United States on one flash drive and mailing it to the South of France isn’t going to work. But working with leaders who are already serving the youth in the South of France to learn of their context, to brainstorm together, to marry together ideas, to implement them with shared resources and vision…now that’d be a dream come true.

Who is doing that already?
Let’s join whoever is doing this–and if no one is doing it, let’s get started.  Isn’t it about time we step out of our 237 year old bubble to embrace a diverse and global community that’s as close as our Instagram and Skype accounts?

I have a dream that our 8th graders would visit strange churches in France, they that would encounter an awkward French youth pastor botching their English language, and see that while the structures are definitely older and the songs selections quite different, it’s the same Jesus that compels her to offer her surfboard and wetsuit anytime they want to borrow it–it’s the same Jesus that prompts her to invite herself to Florida to stay with them for a while even though they’re only in the 8th grade and they really don’t own a thing on this earth.

Global youth ministry is a big dream.
I rarely say it out loud because it scares me to think that I might not be able to see it come true.
But if I believe in what Jesus says (and I do), I’ll cast my cares on him because he cares for us. I know he has planted these dreaming seeds of hope in my soul. And I really don’t need to be ignoring them much longer because there are plenty of Louis type meet-ups waiting to happen in this every day adventure.

I want to give every French word I knew to a couple of kids who are my kids, wherever they’re from.

I might be a U.S. citizen. But I am also French, and Latina, African, and Russian. I am what you are, because you are straight from God–who made us all.

Bringing it in a little closer…

I’m curious, and really want to know how others are reaching out to teenagers in their diverse contexts? Both locally and not-so-locally? How do we open up some time to commune with leaders who need encouragement and help from contexts different than our own? And who knows what gift, what help, what necessicty we have been missing because this conversation has, well….been missing?