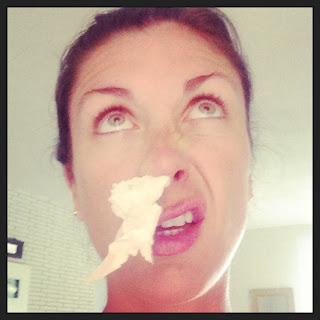 It’s been said that people fear public speaking more than they fear other things, like drowing or being caught on fire.

I’m one of those who would rather speak.

When I first starting out in ministry, “preaching” happened once a year (maybe) when the pastor would ask me to fill in. I’d give months to thinking about one talk. It was much more stressful then. Talking to teenagers  every week didn’t feel like public speaking. It usually happened in a smaller room or in a fellowship hall and it felt more like a conversation. So, that one opportunity a year behind a podium or in front of a bigger crowd could bring on a “don’t suck or get fired” type of feeling.

I’m thankful that I’ve had a lot of opportunities since. And it doesn’t stress me out as much any more. I’ve actually grown to love communicating in front of people!

But, there’s still one fear that I have (ok maybe two).

Fear Number One– Falling off a stage.

Sometimes I wear heels. But it’s been reported that you don’t need heels to stage fail. Anyone can miss a step. I slipped off the stairs in the Gwinnett Center in Atlanta this spring. It wasn’t as embarrassing as I had once imagined it. I told the students about what happened in our next session and it turned into an Instagram game where friends would hashtag their stair fails all weekend. I didn’t get hurt. And we sort of bonded over the whole thing. What I learned? 1- Most things we’re afraid of actually happen. I’ve been speaking on stages since I was 17. It took half a lifetime for me to trip up. And 2-They don’t usually happen like we’ve played them out in our heads. So…I’m thankful. It ended up being a blessing in the long run. (#likestairattacks if you want to see more)

2 Fear- Being sick on stage.

This would including throwing up. Coughing and not being able to talk. Sneezing out a snot rocket on accident. Needing to exit the stage to use the bathroom.

I’d recommend not stepping on stage if you feel this way.
But the coughing/ allergy/ phlegm problems are a little bit harder to read.

This last Wednesday night I was speaking to middle school rockstars at Chapman University.
I wasn’t feeling too bad. Honestly, felt great about the message. My head was clear.
But I had some allergy sinus stuff starting.
The flight had added some pressure but nothing a a little bit of tea couldn’t help.
I was still coughing some, though, and I was a little worried.
It was the dry useless cough that leaves a little tickle in your throat.
I remember having to step out of class in college so I could hack
I was worrying a little about it.

But really thought it wouldn’t be a big deal.
I had water there with me.
We started out with a little game (did great during that time).
But the moment it was my turn. I had to cough.
The choices are: hold your breath while talking (turn purple and die).
Or, cough while shielding the mic.
Or, mute your mic while coughing.
But it just wasn’t one cough, it felt like it would be there the whole time.
Like, maybe every few minutes.

So I let the cough come out and as I did. I mentioned that I had a bit of a stuffy head and I apologized. As I let those first few coughs out I heard a cough in the audience.
Without thinking, I said, “feel free to cough with me to make me feel better”
Well…believe it or not…junior highers listen.
And they coughed with me the entire message.

A good friend was with me though. And she was quick to remind me that the Lord always shines through. That I did great.

I’m always praying for Christ to become greater in my life. For John 3:30 to be so evident that people would see his love over any talent or ablity or gift that I may have. So, when God gives me an opportunity to truly be less…I should be thankful?

That evening during a outdoor robot war (add this to your reasons to love youth ministry), the students were coming up to me. The message was so great (cough). They’d add a cough to their hellos and to their goodbyes and I couldn’t help but smile.

The next day, I was talking with a leader. She told me how one of my stories made sense to their youth group and how they were embracing the forgiveness that Joseph struggled with in their own group.

Later, the thank you’s. I knew they were real. Because were about the fruits and not about the focal person delivering the truths.

So, if you have to speak to teenagers when your sick.

#1 Remember. It’s about God. When we are content with this, our feelings of being less than don’t matter as much. We are content. We believe that God, God’s word, God’s Spirit and presence never changes, even during allergy season.

“If you are humble, nothing will touch you, neither praise nor disgrace, because you know what you are.” –Mother Teresa

#2 Don’t speak if you’re super sick. It might be a chance to give someone you’ve been mentoring a chance to use their gifts.

#4 Prepare well, really well. When you do this. Not a whole lot can shift your mood to worry.

#5 Pray. My friend Carly prayed with me before I spoke on Wednesday. And so did Taylor. I saw the worship leaders praying before they went out to lead. Prayer is our lifeline and our courage.

I hope you have a healthy school year. But if you’ve got a few moments of sickness. Rest. Heal. And don’t worry. You’ve got this because God’s got you.

“A moments insight is sometimes worth a life’s experiences. ” -Oliver Wendell Holmes