She wore an itsy bitsy teeny weeny…black and ombre fringe one piece? 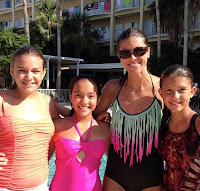 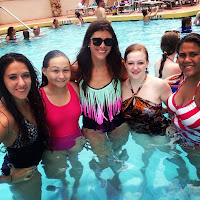 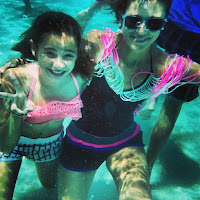 The camp our youth group attended this summer was the best one week camp we’ve ever experienced together. I have about ten posts piled up describing the life change. The family effect. The ministry between our middle school and high school students. Baptism. Worship. Growth.

There was only ONE piece of feedback that wasn’t out of this world positive and it circled around one small detail found in the camp policy:  “girls must wear a one piece bathing suit”.

Shock and awe.
Ok, it wasn’t that drastic. But pretty dramatic for the girls.

The internal objections grew like the grass during the summer rain season…texts, calls, emails. Everyone being very kind, compliant, loving, awesome…but still objecting with “whys” and other thoughts like…

Don’t they know that most girls in Florida don’t have the words “one-piece” in their vocabulary let alone in their wardrobe?

Tankinis are the “obvi mod” (our little abbrev. for obvious modest) choice for swimming with a bunch of people. Why can’t we wear them?

How are we supposed to get our stomach tan when fabric is covering it up?

Why can’t we just wear a shirt over it?

There’s not a one-piece that will fit me. Don’tcha know that?

It’s too hot for a one-piece. I might suffocate. I’m claustrophobic.

I had no idea that one guideline could cause so much mental activity!

Hear me on this.
I believe in modesty.
I believe I am a modest person.
I teach about it and talk about it.

But no one will ever be able to convince me that any spandex/ lycra ANYTHING is modest.
I felt more naked playing volleyball in college than I ever have in a bathing suit!
Spandex v-neck uni-suits–had to wear them if I wanted to play.
Olympic sand volleyball  sports bra-ish tops and “spanks bottoms” that shouldn’t have the word “bottom” in the description because they definitely don’t cover much of that. And we were playing volleyball. Crouching down, rolling over, jumping up, sliding across the floor.  We also have fans. People who watch you do all this. Maybe there’s a reason why we grow numb to it all.

What am I supposed to do? How are they supposed to feel. It’s OK on the court but not on the beach?

I ask myself,  Does a one-piece really avert attention to details?
I don’t think so.
But it helps.

I want to help teenagers have pure hearts and to respect each other–and maybe it’s a good time developmentally for them to start weighing some of this out on their own? Yikes, I realize this is a tough thing to say. They are so young. They aren’t making the best choices. They still need TONS of guidance.

I think about my own decisions.
When I’m with a bunch of people (not family), I wear a tankini. When I’m at church and with our youth group, same thing. But, if I’m being honest -and I always hope that I’m being honest– I prefer to wear a two piece, with a rash guard or tank top over everything if I’m going to surf or doing something active.

Even though many of us whined about it for days.
Even though we tried on suit after suit looking for something that “looked ok”.
Even though we were a little “meh” about the whole ordeal.
We accepted it.

All of this made me wonder what “ok” really is? Does a one-piece really make us look less than beautiful? Who fed us this garbage anyway? Maybe that’s for another blog post?

Sooo…we bought one-pieces. Some of our girls searched for weeks.
And after the camp was over, not one girl complained about wearing it.
It wasn’t a big deal. It was getting over the initial shock of thinking that we may not fit in or look like the “normal” people just down the beach from us that I believe was the biggest challenge.

Next year, everyone who attended last year, likely won’t think twice.
It’s not a big deal now. And that’s fun.
We grew!

We were happy just being together, and the amount of material on our bodies wasn’t going to keep us from having the best week ever.

The benefits of one-piece wearing, as learned in Panama City, summer 2013:

1. We could play sports without playing “make sure everything stays in”.
2. There were never any current or ocean wave induced suit malfunctions.
3. We set a great example that others would be proud to follow
4. We rocked the one-piece and reclaimed it as good
5. We were able to take pictures of each other and post them on social medial without feeling as awkward.

Hmmmm…let’s see…we had to go shopping?
Having different tan lines?
Maybe that’d be half of a good reason.

Yes, it was difficult finding a garment that suited each of us. But once we did, we were FINE.

Now that’s something to talk about.
We were fine.
Ok.
Happy.
Content.
Not worried.
Blessed.

I was at a movie with a crew of our middle school students before camp. After the movie was over a few hung around awhile longer. We decided to go into PacSun, a surf/ skate sort of clothing store. The girls, knowing that we’d all be going to camp soon pointed me to a one-piece. They had overheard me mumbling about how everything I find needs to be about three inches longer. They said, “this is soooooo pretty” you should get this one!

I decided I was going to try to be a party rocker and try the thing on (even though I had already ruled it out as being too short for me).
I was going to try not to complain about how I looked or anything like that in front of them.
1 Tim 4:12 youth pastor…let’s do this…even though nearly every time I’ve tried on a bathing suit at a store I’ve hung it back up and went home wishing I never had to be seen in public again (i know, dramatic, but not far from the truth. and yep, i’m still growing big time when it comes to having a positive view of myself).

Surprise.
The moment I tried it on, I liked it (a FIRST in bathing suit trying-on history).

I asked the girls. “What do you think?” Do you think it looks weird at the top?
Is it fitting weird here? How about here?

I welcome awkward and this was a great chance to hang out in camp awkward-ville for a good five minutes! Are you sure it looks ok? “Yesssss!” They were convincing.

I wanted a truthful opinion and I knew they’d give it to me because they’re in middle school. “We love it Pastor Brooklyn, you should buy it.” And I did. For them. And for me too.
We can love this, and it’s not going to be a big deal.

Favorite part: they picked it out.

Then, I got compliments ALL summer. I can count the number of bathing suit compliments I’ve recieved in my life on one hand.

Was this one-piece magic?

Because it wasn’t just at camp or at places where other people were also wearing one-pieces.
People would stop me at hotels, water parks, at the YMCA.

I had one teenager run to catch up with me at at hotel where our parents were staying just to ask me where I bought my suit.

Was it alternative universe summer? National Opposite Day?
I LOVE YOUR ONE-PIECE. I never thought I’d ever hear that phrase spoken so often. If I had ten suits, just like mine, in my trunk I could have sold all of them at a few different places.

They were deer-in-headlights-stare responding when they learned that teens picked chose it for me. That you could find it locally and that it cost less than $30.

I felt classy, covered, confident.
What more could I ask for as I try to lead my students to feel the same?

So, what’s this long rant all about?

It’s about a youth pastor who changed her mind. I didn’t see a whole lot of value in wearing a one piece because I feel just as self-conscious and exposed in a one piece as I do in two. That’s the truth.

But there was something really great about the solidarity our girls and myself experienced this summer over a small detail. All of us together, learning that it’s ok to try something new.

Modesty isn’t so much about how much skin you reveal. Modesty is about revealing MORE of your heart–your care for others–and the confidence you have in the God that created your beautiful body (whatever shape it is) to begin with–and it’s worth honoring.

Making choices that honor each other, choices that come out of the contentment we find trusting in God give us a chance to grow in our faith–and faith is where modesty and humility is found. It takes faith–to walk the modesty trail.

And it’s about preserving each other’s dignity- having concern for others more than we have concern for ourselves—and lastly, not taking ourselves too seriously.

But I did.
And I’m excited to explore some other one-piece options for next summer.
My friend Mendy found an adorable Lime Ricki suit. It was cool to find out that 10% of every pink suit they sell goes to fund Breast Cancer Research. They also give 10% of all other suit sales to Charity Water, an organization that brings clean and safe drinking water to developing nations.

I would love to hear about your youth group bathing suit stories.

Let’s be nice. And talk about it.